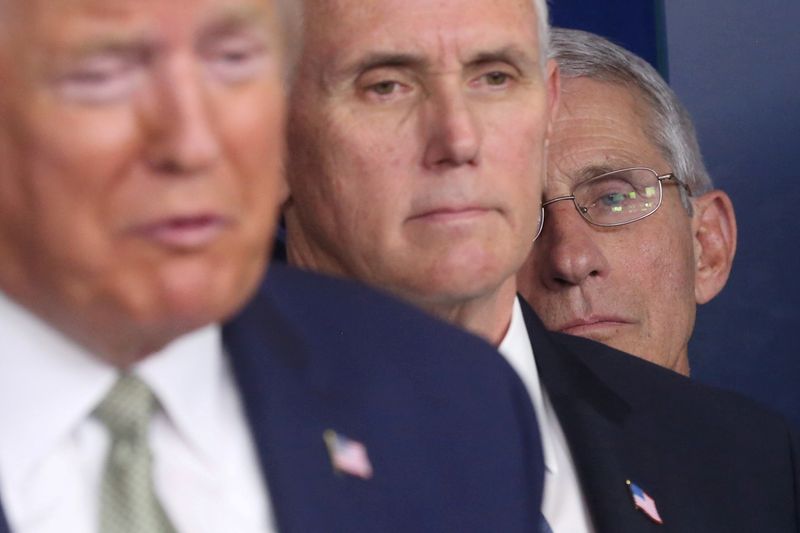 (Reuters) – The leading U.S. expert on infectious diseases, Dr. Anthony Fauci, predicted on Wednesday the country will meet its goal of a coronavirus vaccine by year’s end and was unmoved by the prospect that China would get there first.

While there are no guarantees, “I feel good about the projected timetable,” Fauci told Reuters in an interview.

His comments follow promising early stage data for the Moderna Inc’s (O:) coronavirus vaccine, released on Tuesday, that was developed by scientists at the National Institute of Allergy and Infectious Diseases, which Fauci directs.

Many experts see a safe and effective vaccine as the only way out of the pandemic that has infected millions and killed more than 575,000 people worldwide.

Fauci said Moderna’s results were especially promising because the vaccine appeared to offer the type of protection seen in a natural infection.

Moderna’s candidate, which is set to enter the last stage of testing on July 27, is just one of more than a hundred vaccines in development globally, but only one of a few contenders that have earned millions of dollars in backing from Operation Warp Speed, the White House program that aims to deliver more than 300 million doses of a safe and effective COVID-19 vaccine by January.

Fauci, who has become a popular and trusted figure during the coronavirus outbreak, came under criticism from President Donald Trump and some of his Republican allies as Fauci cautioned against reopening the U.S. economy too soon.

As U.S. states have begun to reopen businesses and coronavirus infections have soared, some White House officials have pointed fingers at China, where the virus first emerged late last year.

Fauci was unmoved by the prospect that China could cross the finish line first. Although he said he hopes China succeeds, he does not think they will win the vaccine race, at least not by much.

“I think everybody’s sort of on the same track.” If they do get there, he said, “They’re not going to get it particularly sooner than we get it. That’s for sure.”

Ultimately, he hopes multiple successful candidates prevail. “I don’t worry about anybody getting there first.”

Even if a vaccine succeeds in provoking an immune response, Fauci said it is still not clear how long that protection will last.

“These are questions that don’t have answers right now, because we’re only six months into the outbreak.” He said it may take a year before that immunity question is answered.

A recent Reuters poll found that a quarter of Americans are hesitant about taking a vaccine, voicing concern that the record pace of development could compromise safety. Fauci said he is aware of such concerns.

Fauci said the normal development process of waiting for a vaccine to be proven effective before manufacturing begins wastes precious time.

“If the vaccine doesn’t work, the only thing you’ve lost is money.”

Israel stocks lower at close of trade; TA 35 down 0.29% By Investing.com